The irresistible rise of Valérie Messika

Hollywood’s top female stars swear by her! With her fresh take on high jewellery, Valérie Messika has modernised a genre that seemed set in stone. Here at SoBARNES, we believe diamonds truly are forever.

The brand founded in Paris in 2005 by Valérie Messika and her father André, a renowned diamond dealer, achieved the impossible in less than 15 years: becoming a global reference in jewellery and high jewellery. Admittedly with a little prompting from Beyoncé, who was the first star to take a chance on the young Parisian brand in 2014.

Each Valérie Messika collection is now an event in itself, in an endless blend of creativity and advanced technical expertise. And the 2021 vintage, Magnetic Attraction, is no exception, joyfully celebrating a new revival after the long months of social distancing and once again giving pride of place to diamonds, and more specifically the pear-cut.

“It was very clear that this High Jewellery collection, solar and colourful, inspired by movement and fluidity, was to be staged on a dancer”, explains Valérie Messika. The 16 pieces that make up Magnetic Attraction are thus incarnated by the young Parisian Fanny Sage, who notably drew attention in clips shot for Stromae, Elton John, Placebo and Angèle.

Playing on the contrasts between yellow and white diamonds, these 16 spectacular pieces are transformed into technical feats where pear-shaped diamonds swing face-to-face or back-to-back in their gold ring.

We’ll willingly admit that we were blown away by the XXL hoop earrings in a high jewellery version of a Calder mobile: “The magic is at work thanks to the pear-cut diamond suspended from the end of a chain set with diamonds to another pear-cut diamond of exceptional dimensions, giving a total of 14.92 carats”, adds Valérie Messika. 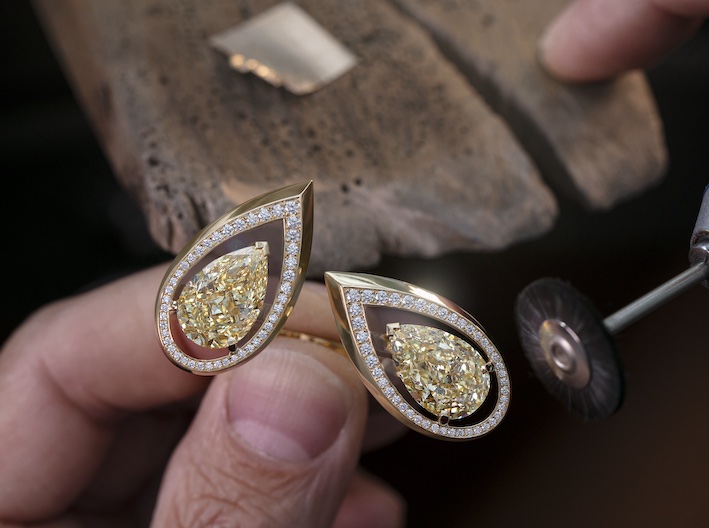 Lady Gaga, Kate Moss, Selena Gomez and Charlize Theron may all swear by Messika, but Beyoncé remains her most loyal ambassador. The high jewellery set baptised  Diamond Equalizer  and worn by Queen B at the 2020 Superbowl in Miami will be talked about for years to come… So how did the superstar discover the brand? According to the papers, in 2014, Beyoncé fell in love with a pavé diamond Glam'Azone double ring in the window display of Le Royal Monceau hotel. Her team got in touch with Valérie Messika to buy the ring, but, banking on Beyoncé’s influence, the jewellery maker gave it to her as a gift. A bold move, but one that paid off as that was all it took to thrust the Parisian brand into the public eye. Still not convinced? Who do you think made the jewellery worn by Beyoncé in the phenomenal video clip Apeshit shot in the Louvre in 2018?