The recovered splendour of the Hôtel de la Marine, Paris

Four years of restoration works have breathed life back into this gem of 18th-century architecture, which is opening its doors to the public for the first time. SoBARNES was fortunate enough to get a sneak preview of the site four weeks before its inauguration.

Could you dream of better timing? Just as France emerges from repeated lockdowns that have put culture to sleep, one of the country’s most marvellous palaces is about to open its doors to the public for the first time since it was built, back in the 18th century. Facing the River Seine on Place de la Concorde stands the Hôtel de la Marine. Ange-Jacques Gabriel, King Louis XV’s chief architect, built the edifice on the monarch’s request. Up to 1789, it housed the Garde-Meuble de la Couronne, the royal office for state furnishings, before becoming the French Navy’s headquarters until 2015. Restored in a project resembling time travel, the Hôtel de la Marine is getting ready to welcome its first visitors in June, once the French President has inaugurated the site. But SoBARNES could not wait that long and slipped into this veritable time capsule ahead of schedule.  (The videos are all in French, but it’s easy to get the gist)

Christophe Bottineau, chief architect for French national heritage sites, oversaw the project. He still cannot get over it. When the last Intendant of the Garde-Meuble de la Couronne left in 1792, the building was closed off, but then the French Navy ministry settled into it (the edifice later became the Navy’s headquarters). ‘At sea, sailors had to constantly paint their ships to protect the wood and metal from salt water’s corrosive effects,’ the architect explains. ‘So when they settled into the site on Place de la Concorde, they followed the same method for generations, painting and repainting coat after coat while never stripping or sanding the coats below’. From an architectural point of view, the result was incredible: the meticulous restoration uncovered the original paints and gilding beneath overlaid coats (up to 18 of them!). 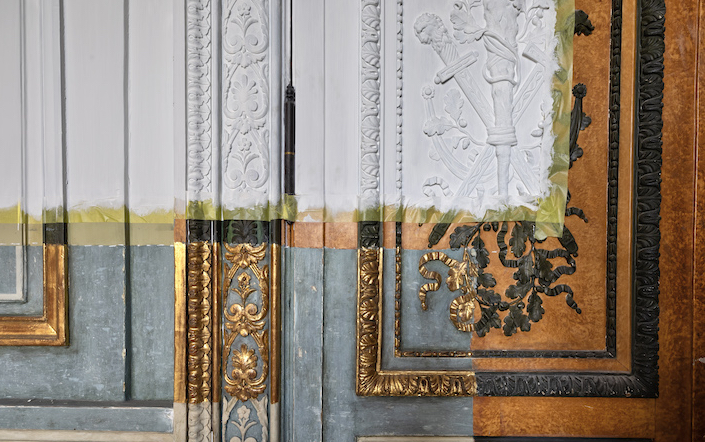 The Intendant’s apartment, which overlooks Rue de Rivoli and Place de la Concorde, has therefore been restored to its original state with a surprising freshness. It is one of the areas open to visitors. ‘We uncovered it exactly as it looked back in 1792,’ recounts Bottineau. It’s a unique case in the world, a kind of Pompeii of classical decorative arts. You can imagine our excitement when we discovered frescoes and trompe l'oeils we knew existed only from 18th-century plans or sealed documents drawn up by revolutionary bailiffs.’

Visitors will also be able to visit the 19th-century stately reception rooms overlooking Place de la Concorde. ‘These were the equivalent of the Hall of Mirrors in the Palace of Versailles, two centuries later,’ says our host. ‘They served as a diplomatic tool to help France display its power and splendour.’

Over several stages between now and the end of 2021, the Hôtel de la Marine will become a museum, an exhibition gallery, a coworking space and a site for leisurely strolls. True to Paris’s reputation, it will also be a place of fine cuisine with a restaurant offering a menu concocted by Michelin-starred chef Jean-François Piège and an all-day bistro reached through the archways along Place de la Concorde and the Cour d’Honneur. It is worth paying tribute to the Centre des monuments nationaux for having dared to introduce the Hôtel de la Marine back into Parisian life. The edifice’s destiny is now in this organisation’s hands. 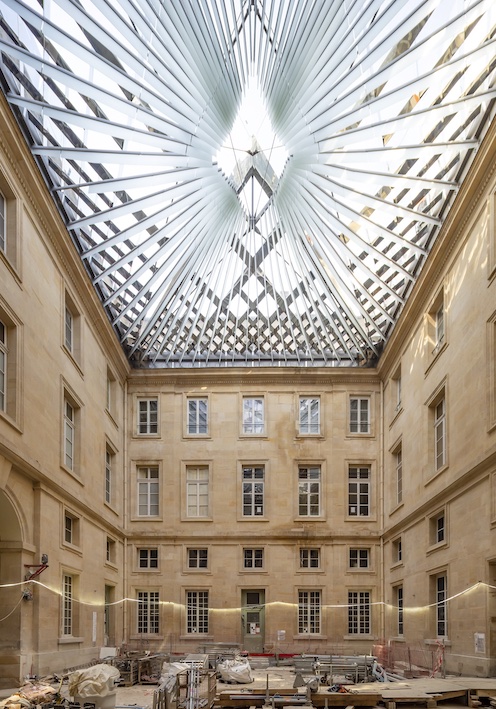 A friendly 100% SoBARNES tip: when you enter the monument, make sure not to miss the glass roof above your head. It caps the Intendant’s court. This overhead arrangement of panes and mirrors fills the court with daylight where it previously stood in darkness. Although sunlight barely ever gets into this court as it is tall and narrow, you can see your shadow cast on the ground, without any electrical device used whatsoever. The feature is at once spectacular and elegant, so fits the monument’s spirit perfectly!