Home›So...PASSIONS›So…Secret›Rolls-Royce: how to rewrite time
So…Secret
by Laurent Caillaud
share this

Rolls-Royce: how to rewrite time

Taking the opposite direction in the race for speed that has been marked the car industry since the very beginning, Rolls-Royce is launching the Phantom Tempus Collection, with a design inspired “by time, astronomical phenomena and the infinite reaches of the universe”. In other words, each second spent in the car is a chance to enjoy instant and infinite luxury… Through this limousine, SoBARNES takes you to the very gates of philosophy. Who would have thought?

The Phantom represents the pinnacle of international luxury cars. A hard one to top, given the circumstances. But nothing will be quite the same after the chaotic year we just lived through. Which is why Rolls-Royce has opted to take the scenic route with the Tempus Collection, a limited edition of just 20 examples guided by Time, “how it passes, and how it can be made seemingly to stand still”, says Torsten Müller-Ötvös, the brand's Chief Executive.

The terms used by Rolls-Royce in presenting this extraordinary Phantom are quite different from the hyperbole generally employed by car-makers. “At a moment in history when so much in life seems ephemeral, our patrons are seeking solace in the unique timelessness, longevity and permanence offered by a Rolls-Royce motor car,” adds Torsten Müller-Ötvös. How does this find practical expression in the car? First of all, in a 100% SoBARNES and truly fascinating detail: there is no clock on the dashboard, setting the driver and passengers free from time and its limits…

From floor to ceiling, and even on the doors, the Phantom Tempus is teeming with references to time and the cosmos. And especially to the pulsar, a phenomenon found only in the deepest reaches of space (the nearest yet discovered is 280 light years away, which represents so many miles that we gave up calculating). Pulsars are white-hot stars emitting electromagnetic radiation in extremely regular pulses, making them some of the most accurate clocks in the universe. In the Tempus, the pulsar theme is rendered in the roof decoration featuring fibre-optic lighting and hand-embroidered patterns. 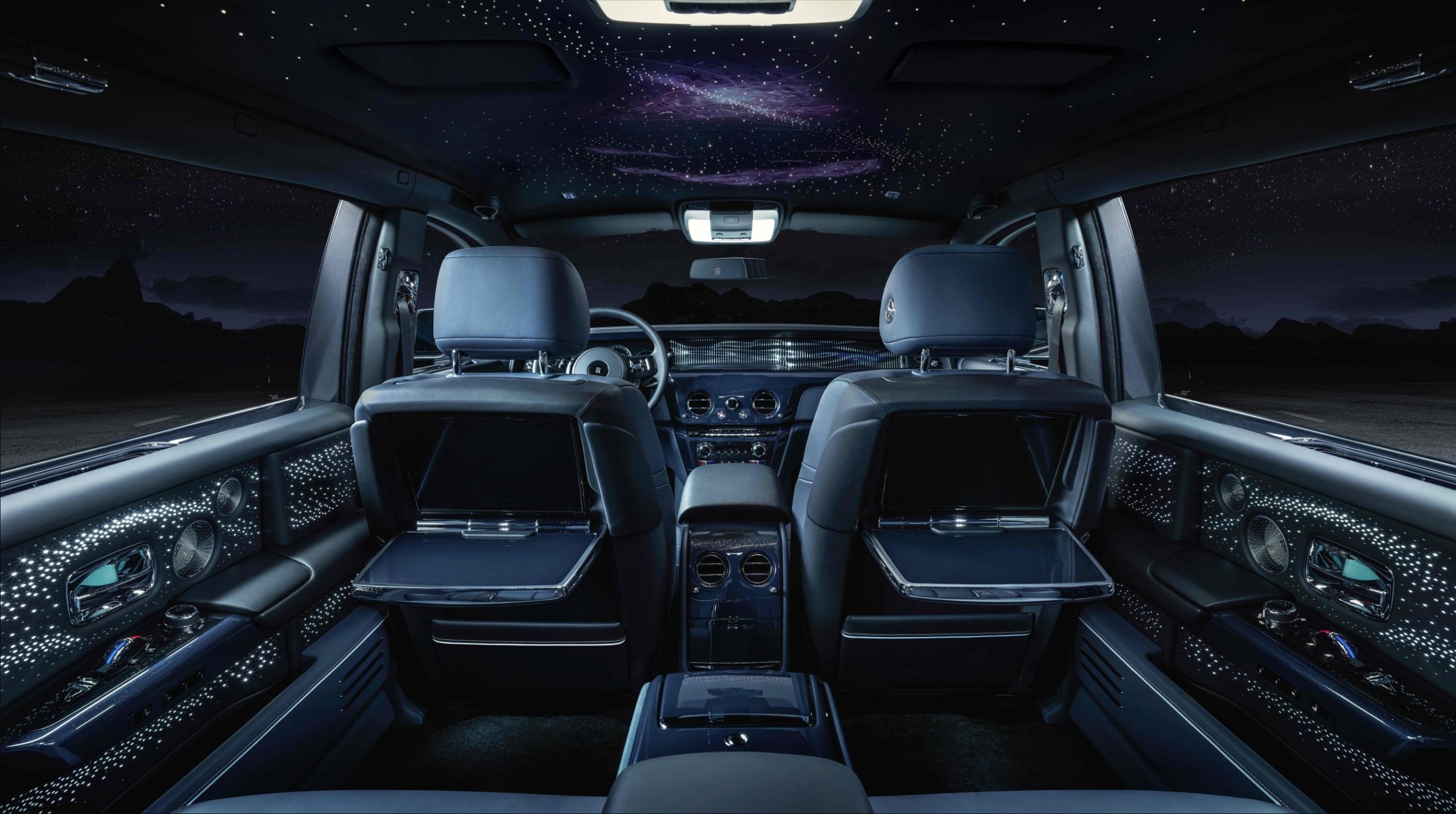 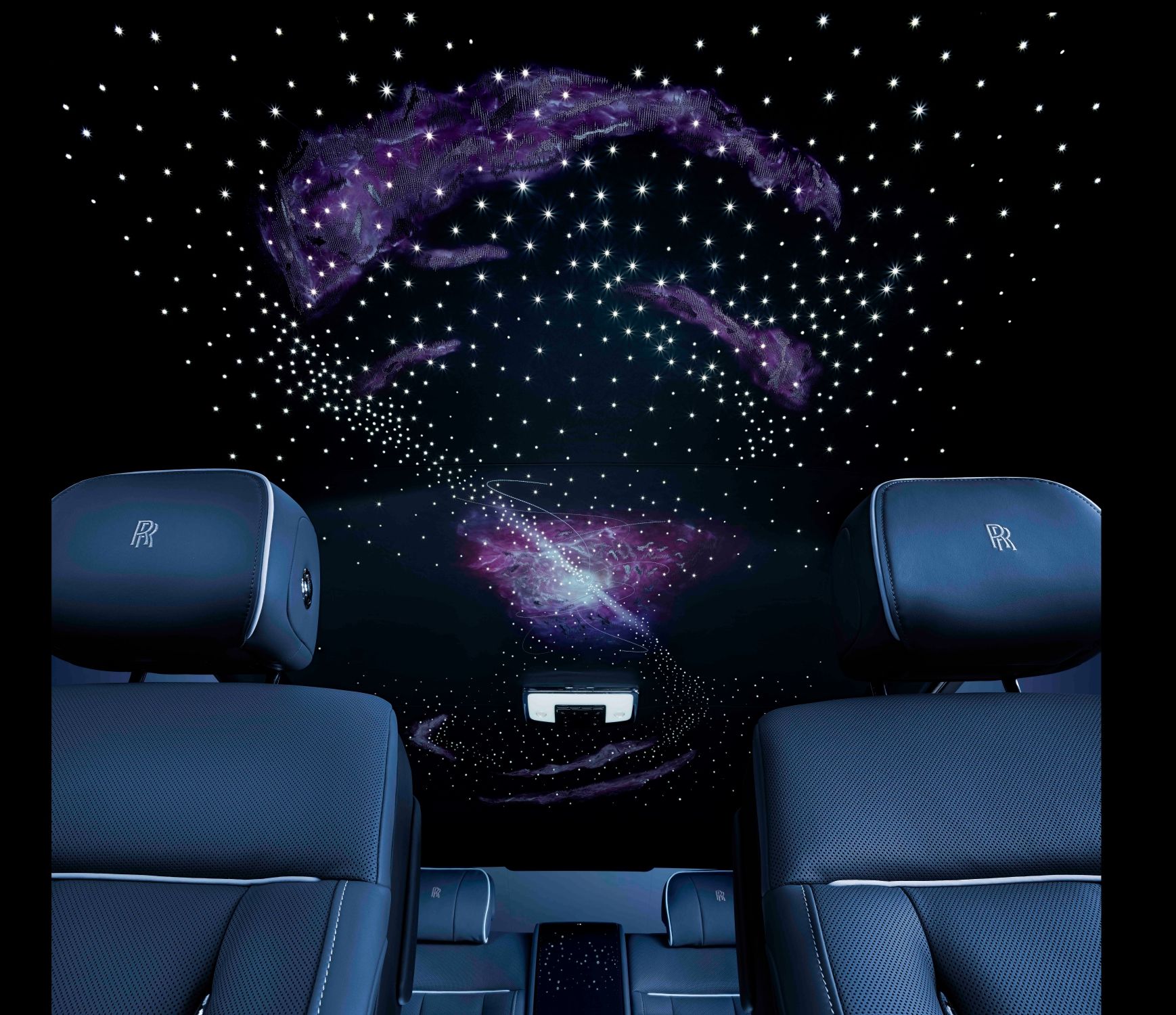 Another aspect of time – the illusion of its standing still – is captured in the fascia which has been transformed into a sculpture, the Frozen Flow of Time. The artwork's 100 columns symbolise the 100-million-year period of a rotational spin of a pulsar star. A quotation from Albert Einstein is engraved on the glove compartment:  “The distinction between past, present, and future is only a stubbornly persistent illusion” (you have 4 hours to write your essay).

And at the rear of the car is an accessory that really hits the spot: a pulsar artwork is hand-painted onto the table (you might have noticed that pulsars are the central theme of our story). Below is a refrigerated chest for the champagne and the caviar, with four hand-blown crystal champagne flutes arranged to evoke the cylinders of a V12 engine. And not forgetting a mother-of-pearl caviar spoon. 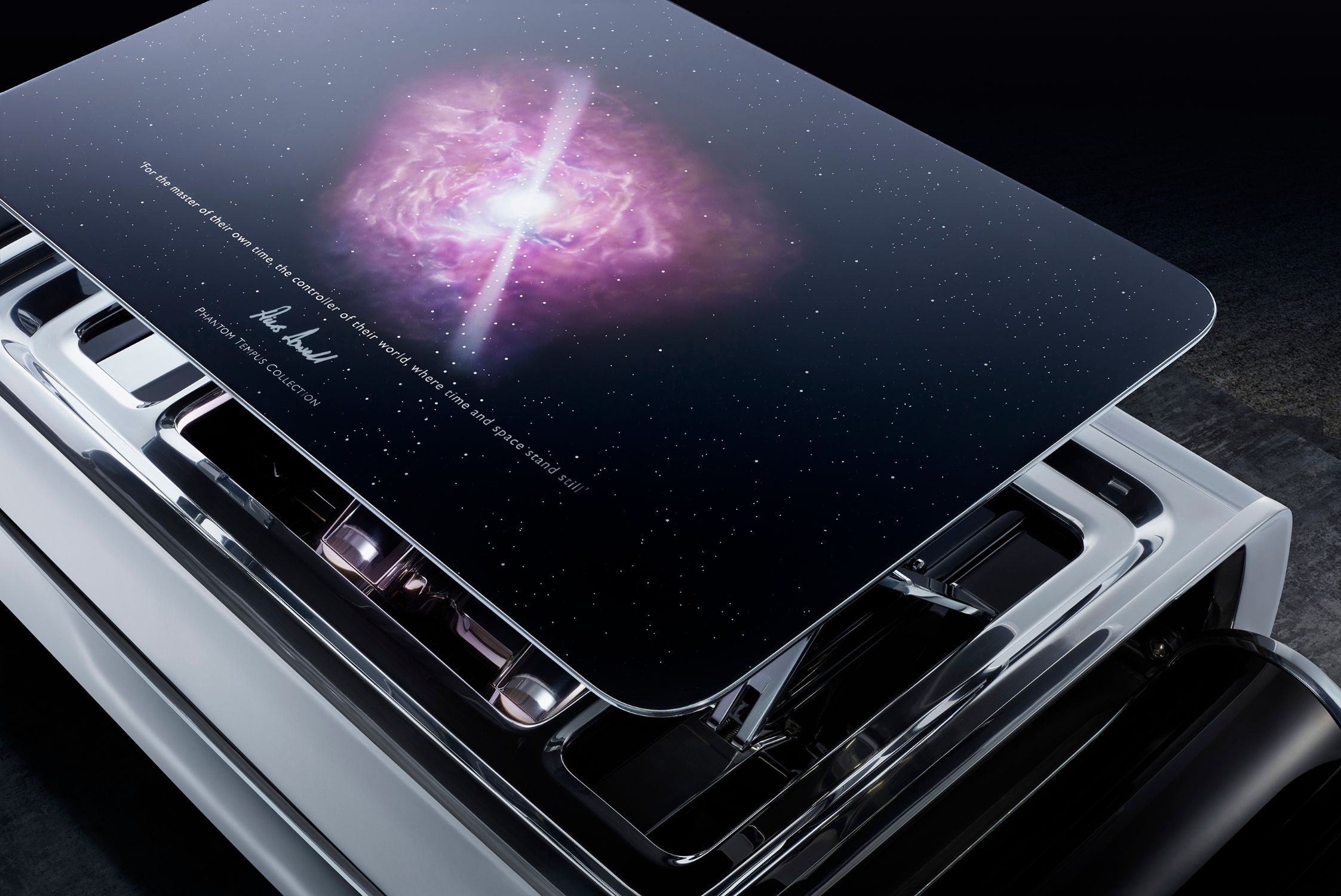 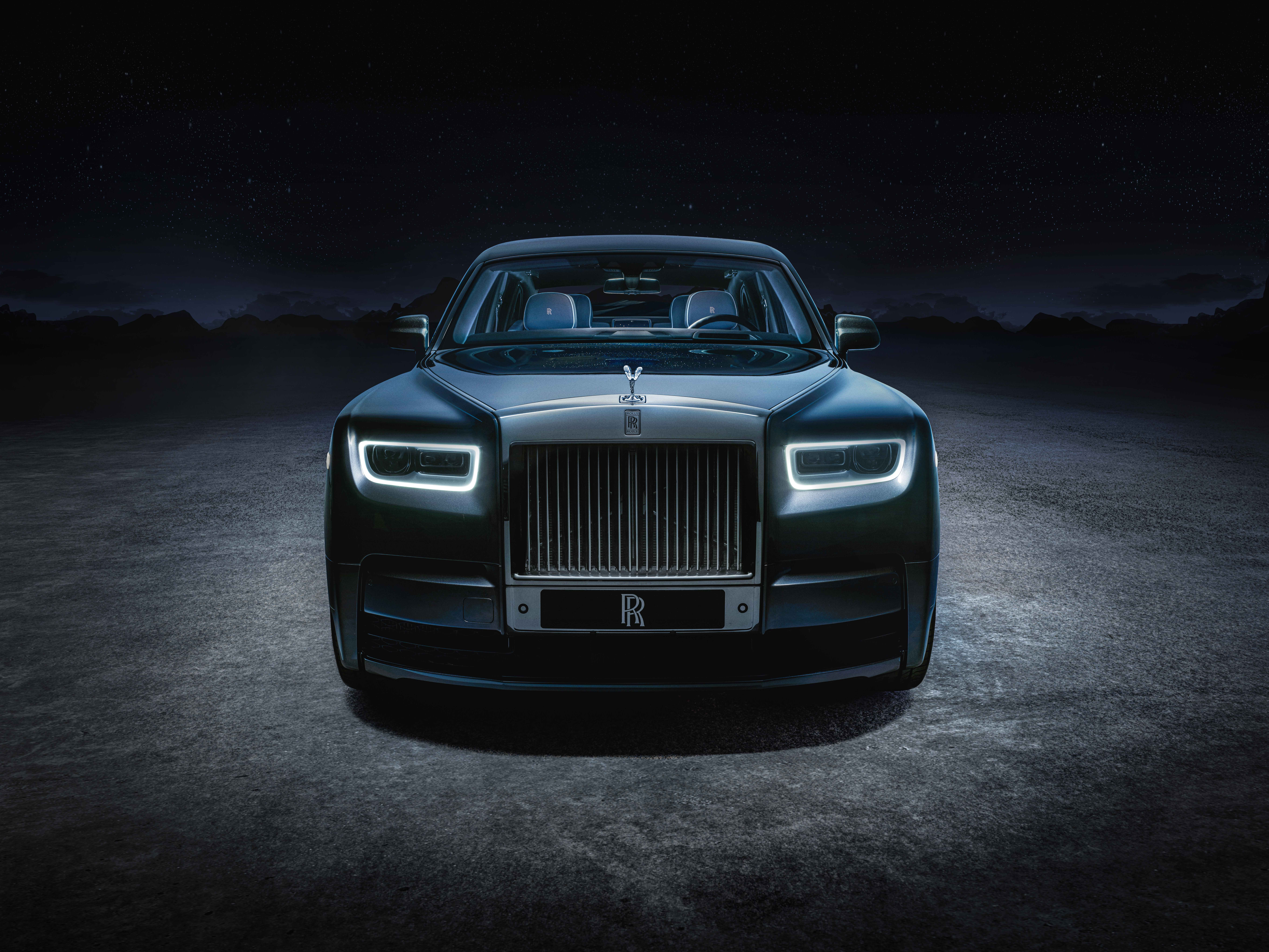 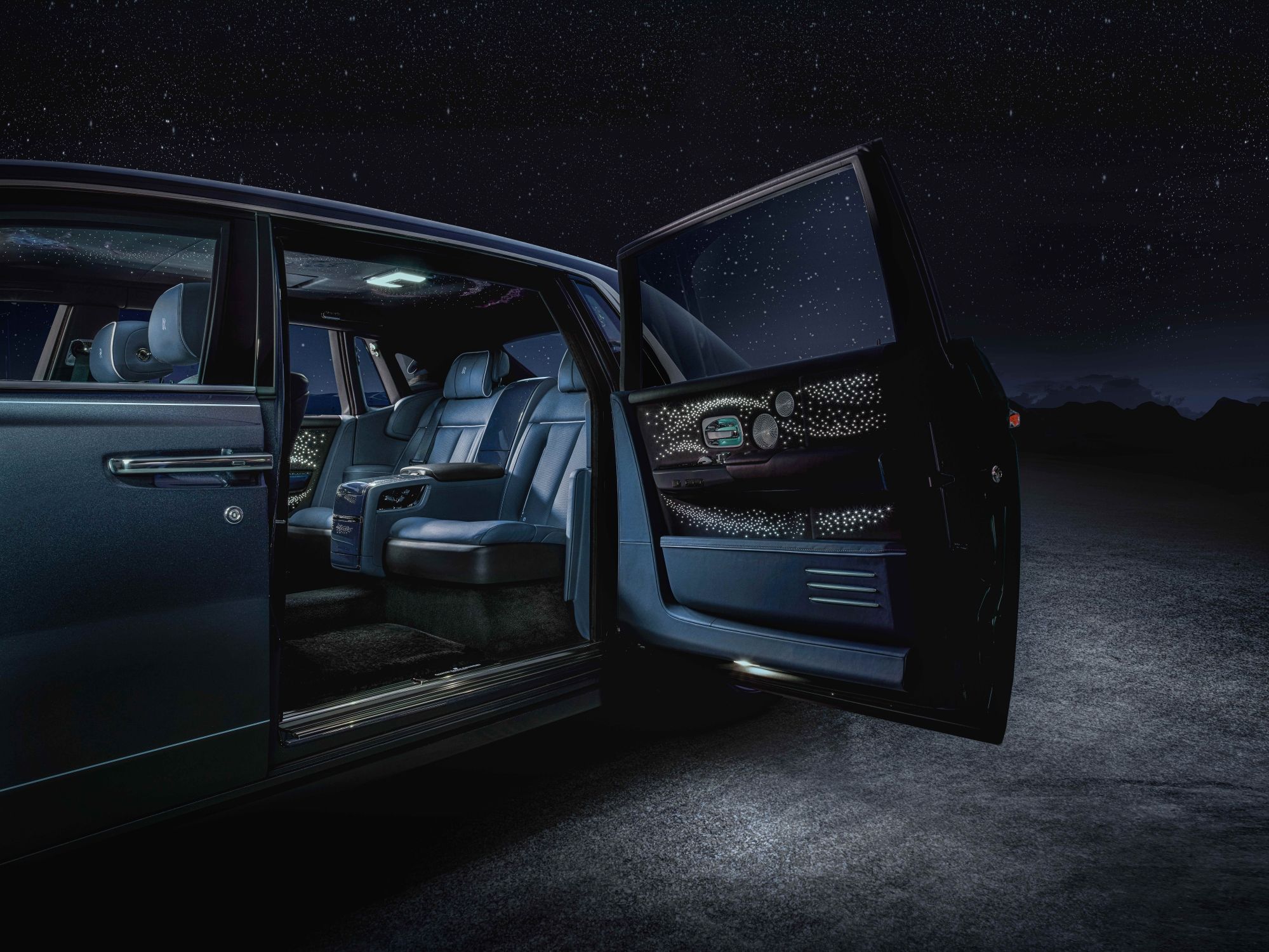 Talking of the V12, do you really want to hear about the engine specs in this Rolls-Royce? Neither do we. But you might like to know that the exterior is painted in a colour called Kairos Blue, “created to embody the darkness and mystery of space”. The paint incorporates jewel-like blue mica flakes which glitter as they catch the light, like the moon.

But isn't it all a bit kitsch? Maybe so. But no matter. Because all 20 cars were reserved by 20 carefully selected loyal customers of the brand in less time than it took to write this sentence. At an estimated price of €500,000. But aren't prices relative, too?