Dior, through rose-tinted glasses in Granville

Without a doubt one of this summer’s most endearing exhibitions. Dior en Roses pays tribute to the couturier at his childhood home in Granville through a remarkable collection of haute couture dresses, accessories and pieces of art from the finest museums. Join SoBARNES on a trip to Normandy.

Christian Dior and roses, a love story that lasted a lifetime. While roses provided the inspiration for the woman-flower silhouette, first dreamed up in the family garden in Granville (Manche) before blossoming in 1947 during the House's first fashion show, it also formed part of the composition of numerous perfumes created as of 1947, starting with the very first among them, Miss Dior.

This passion was the linchpin of Christian Dior’s work, and left fashion, couture and design forever changed. Let us thus make haste and travel to Granville and his childhood home, Les Rhumbs, to take in the delights of the Dior en roses (*) exhibition:

From pale pink to red pink, associated with the Good Little Girls of the famous novel published in the Bibliothèque Rose (the Pink Library) or with the femme fatale, this intoxicating colour was tirelessly used by Christian Dior and his successors for the Haute Couture pieces and accessories chosen for the exhibit: jewellery, scarves, bags, shoes, etc. 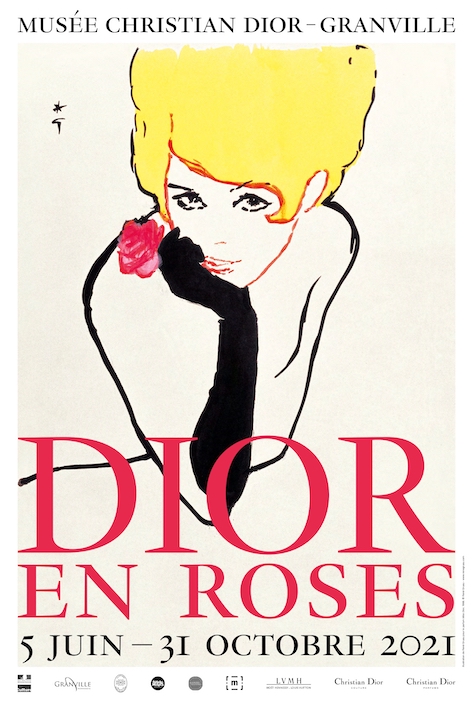 Built in the late 19th century and bought by Christian Dior’s parents the year of his birth, Les Rhumbs villa, now the property of the town of Granville, is more than just a museum. This extraordinary time capsule commemorates the work and the person of this ingenious couturier day after day. A word of advice, take the time to revel in the garden, with its rose garden and pergola designed by Christian Dior. And don't miss the bed of “Jardin de Granville” roses, which originate from the Rosa pimpinellifolia that grows wild on the on the Granville coastline. Recognised for its olfactory properties, this rose is now grown for Christian Dior fragrances just a few miles from the museum!

And because it’s you, SoBARNES has concocted a memory aid to impress at dinner parties this summer:

The garden is open and freely accessible all year round.