Home›So...PASSIONS›So…Secret›Cartier heritage up for auction
So…Secret
by Laurent Caillaud
share this

Cartier heritage up for auction

A rumour that piqued SoBARNES’ interest: Friday 3 March, Artcurial will be offering 240 lots from Cartier and its boutiques around the world at auction. A rare occasion to acquire a piece of French luxury at special rates, and to benefit a charity! Going once, going twice...sold!

PARIS – It’s the start of a new chapter at Cartier, which is renovating its store interiors around the world and putting some of its old furniture up for auction with Artcurial. The auction will be held in two parts, starting with some sixty iconic lots exhibited in the salons of the Hôtel Dassault (Champs-Élysées roundabout) before they go on sale on 3 March. The second part will be will be presented through an online-only sale from 1 to 8 March, entitled “Cartier at home”. Encompassing replicas and authentic pieces, this impressive ensemble embodies the “Cartier taste”, and more specifically that of Louis Cartier (1875-1942) and jeweller Jeanne Toussaint (1887-1976), his muse and until 1970 Artistic Director at the then family-run brand (*). Their shared fascination for neo-classicism, its simplicity, its clarity and its balance, greatly influenced their creations and their universe, with their ideas of beauty shown not only in Cartier jewellery but in the layout of the brand’s boutiques.

The pieces of furniture offered in the sale are in perfect condition, combining comfort, elegance and style, as well as a selection of Louis XVI-style pieces:

The lots include a Louis XVI giltwood console table in carved and gilded wood, attributed to Georges Jacob (est. €15,000/€20,000), a large Louis XV-style flat desk, decorated with European lacquer and a Chinese motif (est. €3,000/€5,000) a Regency-style ebonised bureau plat with gilt-bronze decoration (est. €1,500/€2,000). We strongly recommend the numerous un-upholstered seats ready to be garnished with the colours of their new owners. Not to mention the 20th century furniture, such as the 1940s and 1950s lamps and the elegant coffee tables with more than attractive valuations from €150 and €200. 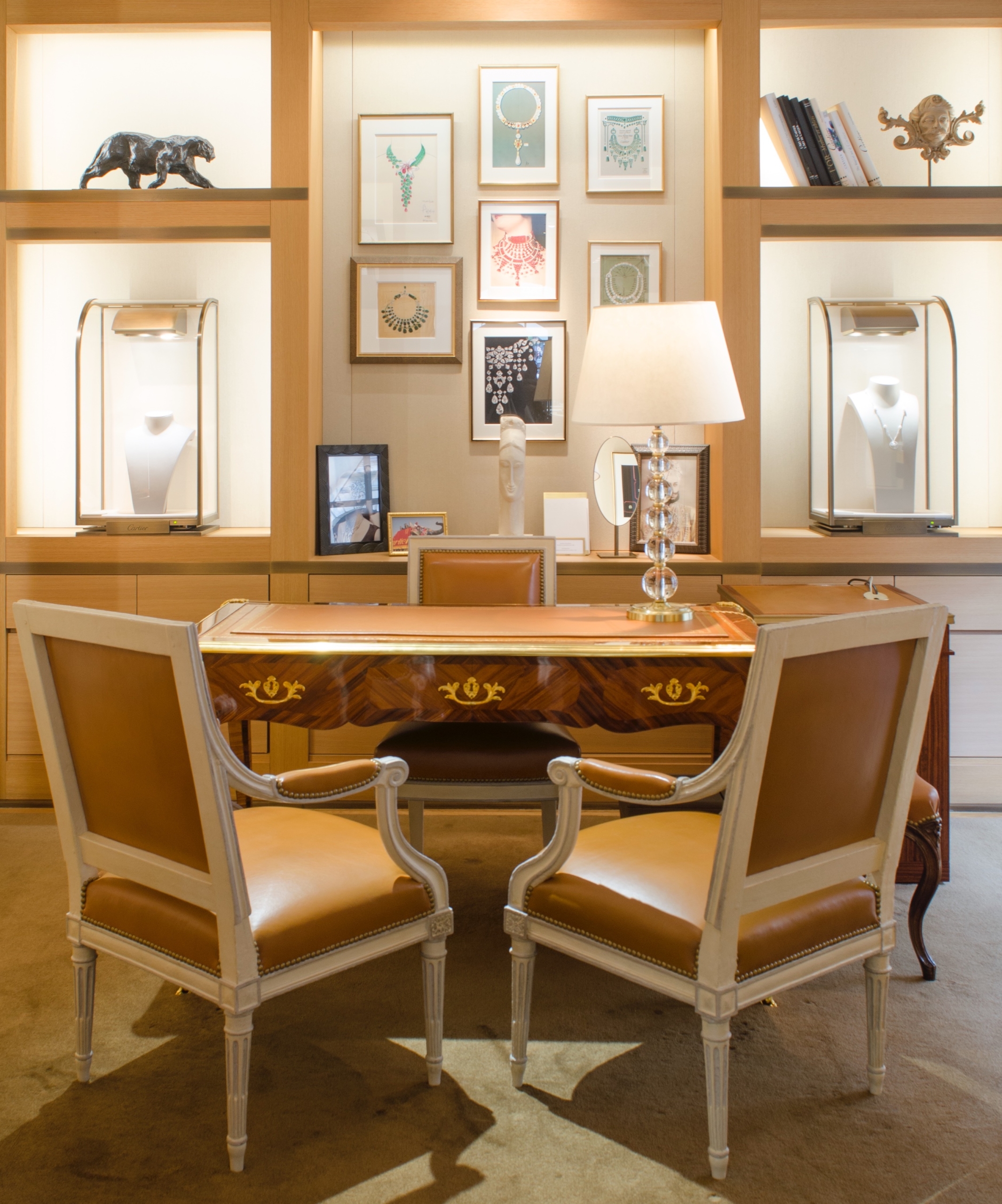 The auction will be orchestrated by Artcurial to benefit Cartier Philanthropy, a corporate foundation created in 2012 in Geneva and committed to improving the living conditions of the most vulnerable - especially women and children. All the more reason to bid, wouldn’t you say?

(*) The life of Jeanne Toussaint, “demimondaine” who became a “Baronne” and who reigned over the haute joaillerie sector for half a century is worthy of a book in itself. And what a coincidence, there even is one! La Panthère, by Stéphanie des Horts, JC Lattès, 304 pages.