He was first known for his jewelry, but the name Hervé Van der Straeten is also associated with furniture. Regardless of the industry, he succeeds at everything he does...With style and beauty.

The millions of women who spritz themselves with a few drops of J’adore every day certainly have good taste. Not only because the famous perfume from Dior smells divine, but also because the bottle is a small work of art in itself. For those who were unaware, it was designed by Hervé Van der Straeten. Is he a designer or a creator of jewelry? Perhaps a craftsman, or even a decorator? This graduate of the École des Beaux-Arts de Paris is a well-known and recognized eclectic who was awarded the Grand Prix des Métiers d’Art by the City of Paris and the label Entreprises du Patrimoine Vivant before being granted the title of Chevalier des Arts et des Lettres in 2008. It is not surprising that Mobilier National (the national institution in charge of furnishing government buildings) is one of his clients, along with Guerlain, Saint-Louis, Helena Rubinstein and, more recently, Ruinart. Recognizing Hervé Van der Straeten's talent for making luxury items even more attractive, these major brands have asked him to design perfume bottles, champagne buckets, drinking glasses and chandeliers.

A Gallery Of His Own

Although his résumé is impressive, his many personal creations fall under no labels. Luckily, Hervé Van der Straeten is one of the few independent designers to have his own gallery, allowing him to "channel the people with whom I work" since 1999. He exhibits his creations along with promoting works by artists he supports in order to "combine very different things so that they reinforce each other in a spirit of contrast" – and with impeccable taste! When strolling through the streets of the Marais, feel free to step inside the gallery at 11 rue Ferdinand Duval. Behind the doors you'll find a large white room revealing the countless wonders designed by Van der Straeten laid out in a perfectly orchestrated array of colorful accents. Nothing is minimalist in this gallery. The angles and curves of each shape push the boundaries of their sculptural forms. With its layers of lacquer and eye-catching materials, the Fever table takes pride of place like a refined wooden monolith. A few steps further, the breathtaking Pipe Show is a perfect example of the eclectic works for which Hervé Van der Straeten is known. This collection of polished brass tubes is arranged in a precise, almost exceedingly bold equilibrium. He explains that these pieces "are not necessarily in line with current tastes." Yet, visitors cannot help but remain fascinated by the sight of the whirling circles in bronze or aluminum that accentuate his mirrors and chandeliers.

Don't expect to find these creations frozen in the gallery in their present state. Between the TEFAF fair in Maastricht, Art Basel, and the many other trade shows and art or furniture exhibitions held every eighteen months – "to protect this freedom of waiting and bringing together 24 new pieces" – the gallery is in constant movement. His impeccable jewelry and furniture pieces require hundreds of hours of craftsmanship, which is why they are either one-of-a-kind or produced in very limited editions. The secret is found in Bagnolet, in Hervé Van der Straeten's own workshops where some twenty craftsmen work their magic on everything from cabinets to bronze pieces. They take pride in offering "highly valuable things that last for a long time." They now work in Plexiglas as well. This material represents a new frontier for Hervé Van der Straeten, after having used it to create his sensational console table Propagation. The blue version will be presented at PAD London in October. Yet another success for Mr. Van der Straeten. 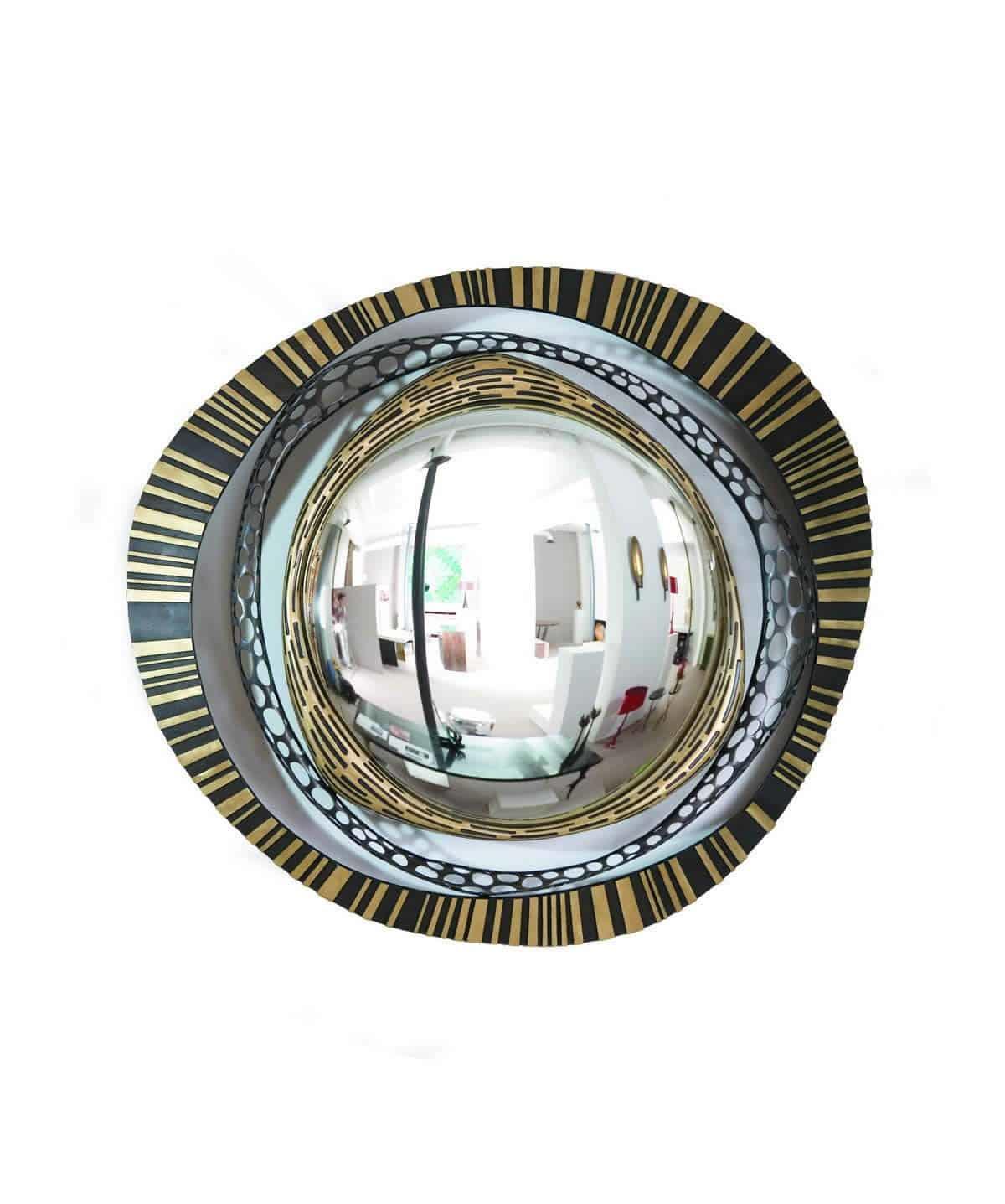 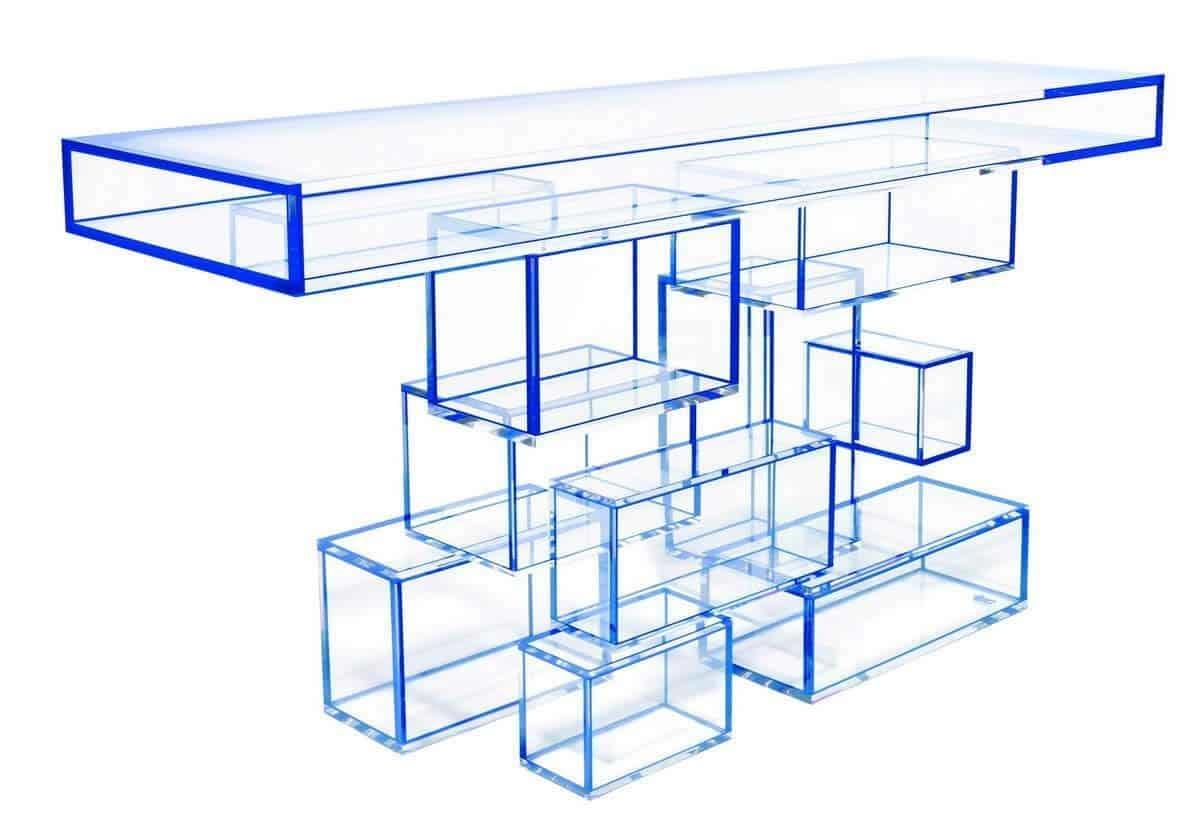 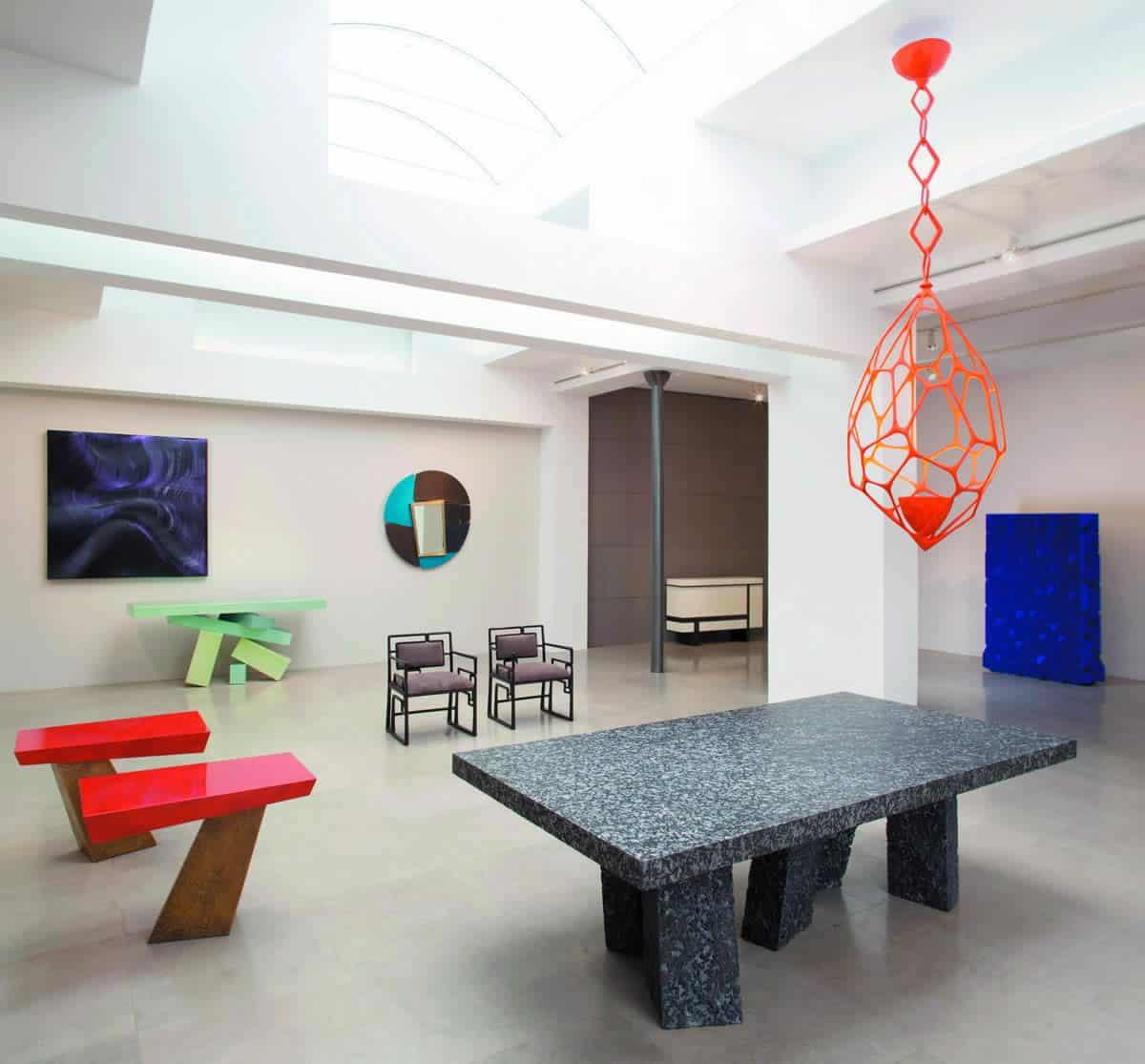 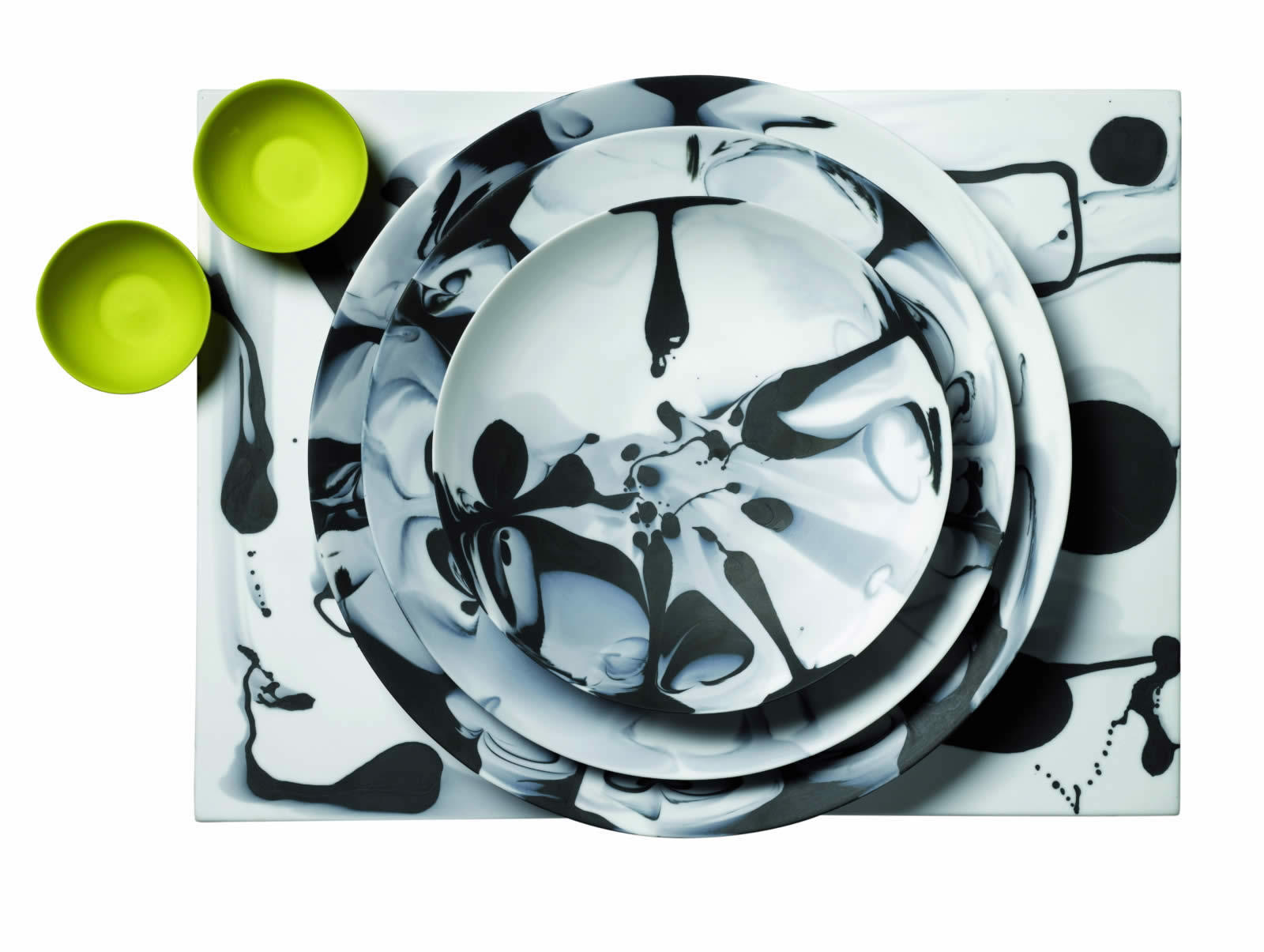 Muriel Grateau: The Evidence of Elegance 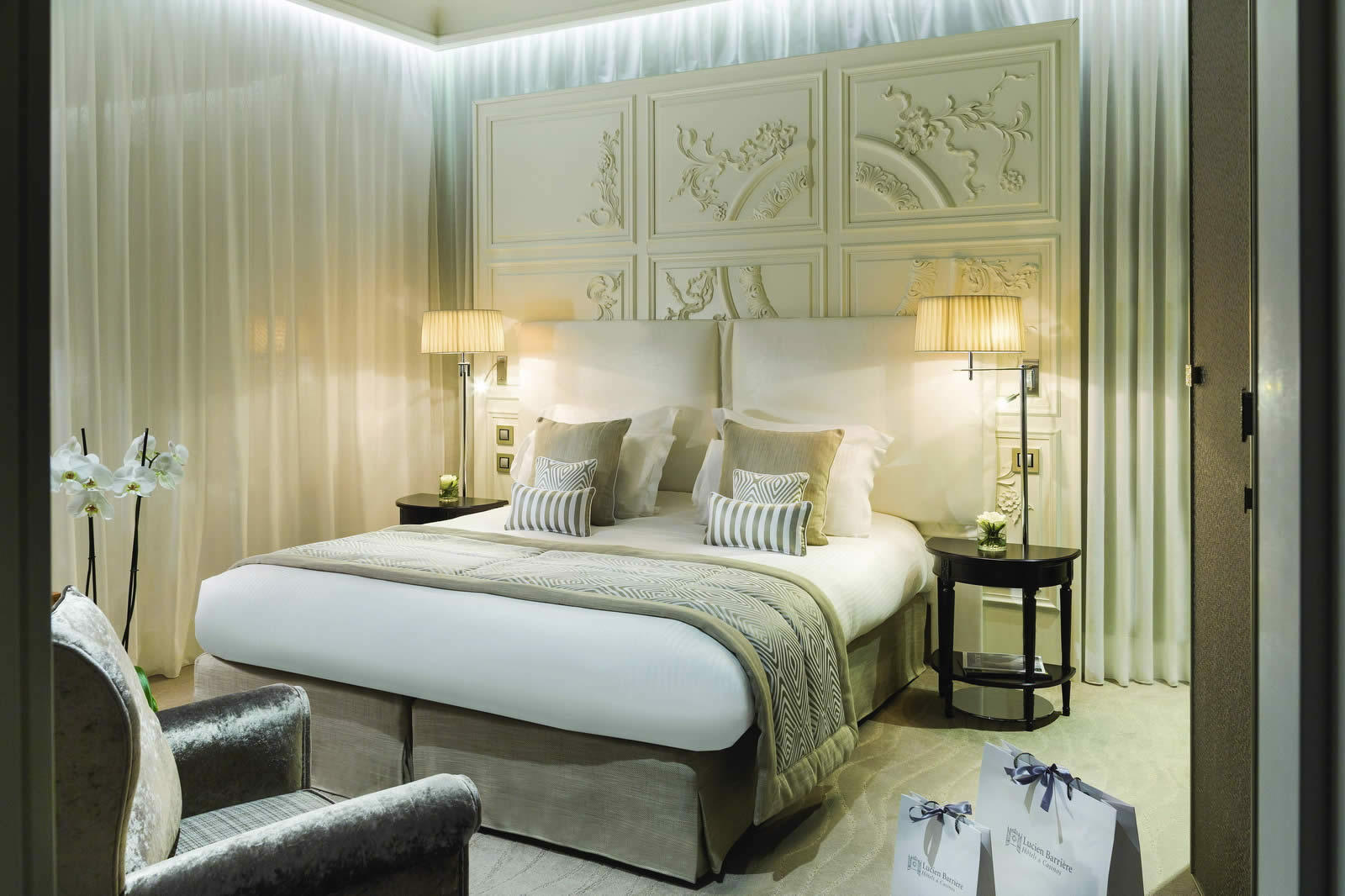